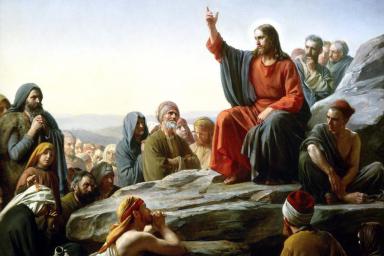 The history of Saint Michael’s is inseparable from, and intertwined with, the history of Newark itself. To discuss one without the other is unthinkable. We can go back to the 1870s and see Newark, a lazy, peaceful town on the Passaic River, beginning its metamoraphosis. The population is changing dynamically and industries are emerging. Newark is transforming into a city.

The Well- known Clark Mills on the banks of the Passaic River provide work for thousands of Newarkers who begin to build their homes near their jobs. Mount Pleasant Avenue becomes for its “respectability and comfort”; the cemetery of the same name is “one of the loveliest eye ever held.” And, starting in the ’70s, many well-known wealthy and business people are building their residence near fashionable Forest Hill, then very much an agricultural and wooded area.

As the city and its people move northward, so does the church. It is  too difficult for the Catholics of this area to walk to Saint John’s Parish on Mulberry Street. So, in 1878, the Most Rev. Michael a. Corrigan, bishop of Newark, commissions Father Patrick Leonard of Saint John’s to build Saint Michael’s Church.

The church was established at 172 Broadway in the southeast corner of the North (formerly the eigth) Ward, when the development of the sector was just beginning. In fact Broadway, then known as Belleville Avenue, was unpaved and people had to depend on the trolley or their own footpower to go to church. Saint Michael’s was officially incorporated in the state of New Jersey on April 24, 1878, from which point progress came in leaps and bounds.

In  1838 Father Patrick Moran, pastor of Saint John’s Parish (the first parish in the Archdiocese of Newark) resolved to enlarge his church by extending the rear of the edifice into Saint John’s graveyard.

That same year, Father Moran purchased a good piece of land on Belleville Avenue for Saint John’s cemetery. Part of this land was reserved of the future construction of a church.

The Support of Saint Michael’s loyal parishioners was not static. It preserved and grew. Once completely free from debt Saint Michael’s Church was consecrated October 7, 1887, by Bishop Winand Wigger.

Father Leonard was a man of uncompromising adherence to the principle of propagation of faith, and also a nerveless builder. After completing the construction of the church, he started working on building the rest of the physical plant needed by the parish community. In 1879, he built the rectory, that for 99 years has served the people of Saint Michael’s.

It was on this land, that 40 years later, on June 16, 1878, the cornerstone of Saint Michael’s was laid. The ceremony was presided over by Bishop Michael A. Corrigan. A crowd of over 3000 persons attended. A little more than three months later the board of trustees (Bishop Corrigan, Msgr. George H. Doane, Reverend Patrick Leonard, William Dunn and Peter Grace) voted to borrow $13, 000 to help pay for the new structure (the entire church cost “only” $20, 000).

Father Leonard offered the first Mass in the still incomplete edifice Sunday, November 17, and the church was formally occupied for divine worship on Christmas Day.

On February 23, 1879, the formal dedication services were celebrated and the church placed the patronage of Saint Michael the Archangel. It was the fifth of the 34 Catholic parishes that serve the people of God in the city of Newark.

Having become too old to maintain, the rectory was demolished  during the summer of 1978 and moved to 23 Crittenden Street. The new rectory also houses the chapel which is open for weekly Masses and Devotions. On the site of the old rectory a larger shrine in honor of Saint Jude will be erected; and a meditation garden in the two empty lots adjacent to the present Saint Jude’s garden.

For Father Leonard it was unthinkable to have a parish without a school. In the minutes of the council meeting of the Sisters of Charity, dated August 1, 1879 we read:

By the time Father Leonard died late in 1892, Saint Michael’s school and convent had outgrown the premises opposite the church, The reins of the parish fell to another Irishman, the Reverend Denis McCartie, who showed himself to be a very capable successor. In 1893 he erected a much larger school in the rear of the church and moved the sisters into a newly constructed convent north of the church.

The three-story school building housed thousands of students, both at the grammar and high school level, until it was demolished in 1966.

The Sisters of Charity have served the parish continuously since that date. Classes met in the basement of the Church and also in a frame building of two rooms located in the rear of the church. A combination school and convent was built across the street from the church in 1881.

In the interest of producing needed income, Father McCartie converted the old school and convent into the dwelling known first as Columbian Flats, then as Loretto Hall – a residence for working women – operated by the Sisters of Saint Joseph of Newark.

When Saint Michael’s was founded, it encompassed the territory enclosed by the Passaic River, the Belleville and Bloomfield lines, and the south side of Seventh Avenue. Today that area is smaller, bounded on the north by Chester Avenue and Ballantine Parkway; on the west by Branch Brook Park; on the south by Bloomfield Avenue, Seventh Avenue, Clifton Avenue and Clay street; and on the east by the Passaic River. Four other parishes of the Archdiocese of Newark owe their beginnings of Saint Michael’s: Sacred Heart Cathedral, Our Lady of Good Counsel, Saint Francis Xavier and Our Lady of Perpetual Help.

Men and women raised within the parish and educated in its schools have gone on to devote their lives to God and the Church-one bishop, eight priests, one brother and 35 sisters in various religious communities.

Every parish, it seems, has a golden age, Saint Michael’s is no exception. It blossomed between 1913 and 1949, when a single man – Monsignor Felix M. O’Neill – directed its fortunes.

The Sisters lived at 196 Broad Street from January 1, 1926 until 1928, when Monsignor O’Neill purchased an abandoned non-Catholic church and converted it into a club house with an adjoining building for the sisters at a114 Stone Street, in the center of the Italian section of the parish. During the depression years the Trinitarians offered catechetical programs for as many 600 public school children per year. For many years they also conducted kindergarten classes at Saint Michael’s school.

Realizing the need of a sound Christian education for older children, Monsignor O’Neill established Saint Michael’s High School in 1933. The thriving grammar school acted as a good feeder to the high school.

The first addition to the physical plant during his pastorate was the present brick convent built in 1915 to replace the wooden structure on the same site. This building has housed hundreds of sisters who have served as teachers both in the grammar and high school.

With the influx of Italian immigrants, Father O’Neil faced the problem of reaching the large number of children attending public schools.  He appealed to his good friend, Father Thomas A. Judge (1868 -1933), founder of the Missionary Servants of the Most Holy Trinity, for sisters. At his urgent request three sisters were assigned to Saint Michael’s.

To honor Monsignor O’Neill, the year books published by the senior classes from 1939 to 1962 were called “The Felician” which means “belonging to Felix.”

The year 1941 was a momentous one for Monsignor O’Neill and for Saint Michael’s. To complete the physical setup of the high school Monsignore purchased a bank building on Bloomfield Avenue and converted it to a gymnasium. Monsignor O’Neill often bragged that his was the only parish owning a bank!

The same year he purchased the former Emmanuel Reformed Episcopal Church on the corner of Broad Street and Fourth Avenue, to be used as a center for parish social and recreational activities. Called the Lyceum, it also housed a number of grammar school classes, the school cafeteria and was the site of the first bingo game.

As he neared the end of his long and fruitful life, Mosignor O’Neill needed the help of a capable administrator. The job fell to Father Eugene Reilly. He served as administrator on three occasions from 1946 to 1953 – for over two years before Mosignor O’Neill died, and then until Father Merity became pastor, and again, from Father Merity’s death until Father Mahoney became pastor.

The Reverend Aloysius J. Merity became Saint Michael’s fourth pastor in 1950. He added new classrooms to the high school and gave new life to the various organization within the parish. Father Merity’s untimely death did not allow him to see the realization of his two great wishes: the celebration of the Diamond Jubilee and the restoration of the church to its original beauty and grace.

It was the Reverend Leo L. Mahoney who realized Father Merity’s plans and who renewed the spirit and the enthusiasm of the parishoners through the seventy-fifth anniversary  celebration, the special campaign and the renovations was in excess of total cost of the renovations was in excess of $200, 000. The spirit of sacrifice and dedication that permeated the campaign coupled with the beauty and functionality of the restored church made “Saint Michael’s once again the pride of Newark.” Father Mahoney’s renovations, and minor modifications made later in the sanctuary by Monsignor Fitzsimmons, gave to the church building its present look.

The next period of substantial growth at Saint Michael’s was in the turbulent 1960s, under the pastorate of Monsignor Hugh J. Fitzsimmons. With the parish experiencing a population boom of sorts, Monsignor Fitzsimmons saw the need for an enhanced educational setting for the grammar school youths: a larger plant, safer and more conducive to learning.

Planning quickly became action. The old Saint John’s cemetry was removed and in its place was constructed a beautiful modern school and a new Cenacle convent, which in this centennial year has become Saint Michael’s new rectory. These buildings were dedicated by Archbishop Thomas A. Boland on May 5, 1962. In 1966 the new school building was enlarged, the old school was demolished, and the huge parking lot between the church and the school was constructed. Thus, Saint Michael’s plant acquired its present looks.